The ectopic with a broad QRS

A kaleidoscope of colour

One of CardioScan’s technologists was asked to change a Holter monitor report which stated that the ectopic beat in the illustration below was an atrial ectopic conducted with aberration. Despite her explanation, the physician insisted that it was a ventricular ectopic and that we change the report to state this for all the ectopics. 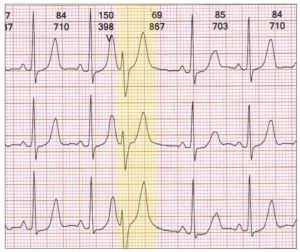 What do you think and how can we differentiate between the two?

The above ectopic has a broad QRS, no obvious P wave and none of the leads are V1 (the recorder was a myPatch with the electrodes in the patch. However, the initial deflections in all three leads were identical to the sinus QRS and suggests that the ectopics was conducted via the His bundle and beyond.

The above illustration does not have enough information to make a diagnosis, so I asked to see other similar ectopics in the report. Being a CardioScan technologist, she was prepared and immediately showed me three other ectopics as shown below. 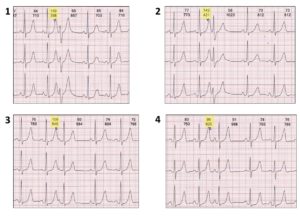 Between images 1 to 4, the ectopic gradually becomes less premature, allowing the P wave to emerge and the QRS to narrow revealing obvious aberrant conduction

Aberrant conduction is a physiologic phenomenon which results from intermittent uneven physiologic refractoriness in the ventricular conducting system from an early supraventricular beat. There is QRS widening, consequent to a delay or block in one of the bundle branches (usually the right) or a more peripheral branch

This is further explained in the illustration below.

Below is a typical example of an atrial ectopic conducted with aberrancy. The lead is V1 to confirm a right bundle branch block configuration. There is a P wave and the broad QRS has a rSR’ appearance referred to as “rabbit’s ears”. 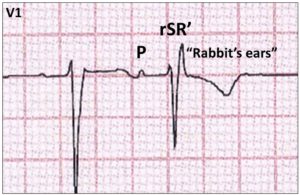 The concept of aberration was recognised almost a century ago, but popularized by Gouaux and Ashman in 1947 in atrial fibrillation (now known as Ashman phenomenon, probably as people couldn’t spell or pronounce Gouaux). The objective was to differentiate between a broad QRS complex conducted from the atrium and a ventricular ectopic. This was critical at that time, as in my early days before beta blockade, aberration required more digitalis, whereas ventricular ectopics was a sign of cardiac glycoside toxicity.

Note that in atrial fibrillation, there is a long cycle/short cycle phenomenon which increases the right bundle branch block action potential duration and encourages aberration. However, this may also encourage ventricular ectopics and hence the importance of rabbit’s ears.

If the ventricular response to atrial fibrillation is very fast and almost regular, then all the complexes may be conducted with aberration, mimicking ventricular tachycardia as seen below. 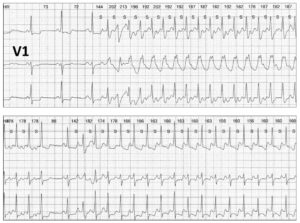 Once again, there is a right bundle branch block configuration demonstrating an RsR’ appearance. In this illustration, the Holter lead configuration has the middle lead as V1. As the rate slows the QRS narrows.

All the technologists at CardioScan do.

A kaleidoscope of colour