Is this dual chamber pacing?

Report ECGs with your eyes open!

Chronologically, single chamber ventricular pacing was the first method of long-term cardiac pacing. During the early 1990’s, with the introduction of atrial pacing and a plethora of dual chamber pacing modes, it became necessary to design a simple method of recognition of the pacing mode programmed. After a number of iterations, a three letter identification code evolved with a fourth letter to identify a rate adaptive function.

To summarize the code:

Single chamber ventricular pacing can be identified on the ECG by a:

There are three programmed modes for single chamber ventricular pacing.

The stimulus artefact (unipolar, red vertical arrow) continues unabated through the tracing. Provided the ventricle is not refractory, there is a paced QRS-T wave (red highlight). However, if a native QRS is present, the stimulus artefact (red stippled vertical arrow) lies within the refractory period of that intrinsic beat; sinus beat with normal conduction (yellow highlight) or ventricular ectopic (blue highlight).

The stimulus artefact (unipolar, red vertical arrow) indicates ventricular pacing (red highlight). When a native QRS occurs, it is sensed by the pulse generator and the next paced beat is inhibited (red vertical stippled arrow). There is a ventricular ectopic (yellow highlight) and a sinus beat with prolonged conduction (blue highlight). Following the sensing of the sinus beat (blue vertical stippled arrow), the pacemaker timing cycle is reset, and ventricular pacing follows after an appropriate delay.

With single chamber ventricular pacing, there is no pacemaker recognition of atrial activity, unless it conducts to the ventricle.

There is AV block and the sinus P waves (red highlight) are dissociated from ventricular pacing (red vertical arrows). A ventricular ectopic (yellow highlight) is sensed.

This is common with ventricular pacing (red vertical arrow) and underlying atrial fibrillation with AV conduction (Vs) when the ventricular response is near identical to the pacing cycle (red, yellow and blue highlight each 1000 ms). The fusion beat (V fusion, red stippled arrow) is an amalgam of both native and paced QRS-T.

A poorly recognised programmable function with ventricular pacing is Hysteresis.

The appearance on the ECG is confusing because the pacing rhythm appears to violate the programmed low rate. Hysteresis allows the sensing window of the pacemaker to be extended to encourage the native rhythm (1500 ms yellow highlight), although the actual pacing rate without sensing is not altered (1200 ms red highlight). The underlying rhythm is atrial fibrillation and not surprisingly there is ventricular fusion (red stippled arrow, V fusion) after 1200 ms (blue highlight). When hysteresis is applied to atrial fibrillation, the resultant pauses may be symptomatic.

In the absence of atrial fibrillation, ventricular pacing may result in retrograde conduction (inverted P waves, red highlight), and this may occur even when anterograde conduction is blocked (complete heart block).

Because the atria contract against closed AV valves, the patient may have significant symptoms such as engorged pulsatile neck veins, persistent pulsatile headache or shortness of breath due to retrograde pulmonary venous flow. When symptomatic, this is referred to as Pacemaker Syndrome and can be cured by upgrading to dual chamber pacing.

An early non-programmable unipolar VVI pacemaker implanted in the abdomen. Each time the patient sat up from the prone position, marked dizziness and pre-syncope would occur as a result of abdominal skeletal myopotential inhibition. Consequently, most of the early synchronous or demand pacemakers were VVT.

Even though the energy delivery into intrinsic beats does not contribute to the QRS, the pacing rate appears to increase and is energy expensive. 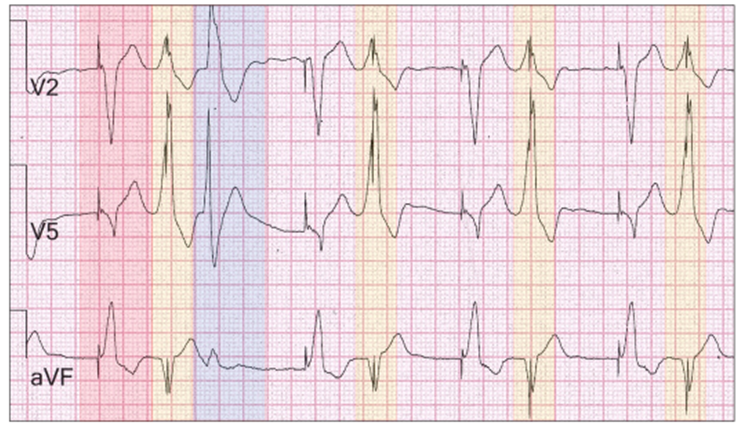 VVT pacing with ventricular bigeminy and couplet. Unlike ventricular pacing (red highlight), the sensed ventricular ectopics (yellow highlight) have the stimulus artefact embedded within the QRS. The early fear that inappropriate continual sensing of interference would lead to pacemaker tachycardia was overcome by extending the pacemaker refractory period (no sensing can occur) to limit the upper pacing rate to ~120 bpm. A very premature ectopic as part of a couplet (blue highlight) is not sensed in the conventional way and lacks a stimulus artefact.

More recently VVT pacing has been incorporated into biventricular pacing systems for cardiac resynchronization therapy (CRT). The objective, without sound scientific confirmation, is to try and resynchronize ventricular ectopy to improve outcomes. This may lead to confusing ECG appearances suggesting pacemaker malfunction. 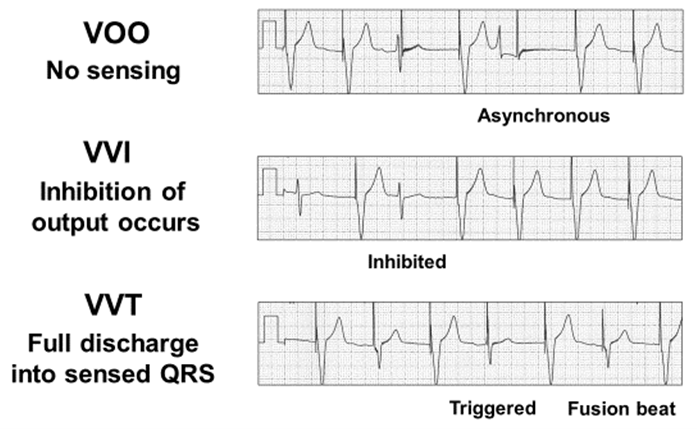 Is this dual chamber pacing?

Report ECGs with your eyes open!