The Upside Down ECG

Little is known today of the rich early history of pacing therapies for the treatment of tachyarrhythmias in the era prior to electrophysiological radiofrequency ablation. At the time, drug therapy was limited and there were also open heart/chest procedures available with attempted surgical destruction of the focus or pathway and later direct radiofrequency ablation after limited mapping. Surgical failure of atrial tachyarrhythmias usually meant surgical ablation of the conducting system and implantation of a single chamber pacemaker using epicardial leads. Hence, the novel attempt at less invasive pacing therapies, was regarded as a blessing.

One of the earliest attempts of using pacing therapy to revert supraventricular tachycardia, was to implant a very small radiotherapy receiver (1) without a power source in the infraclavicular region. 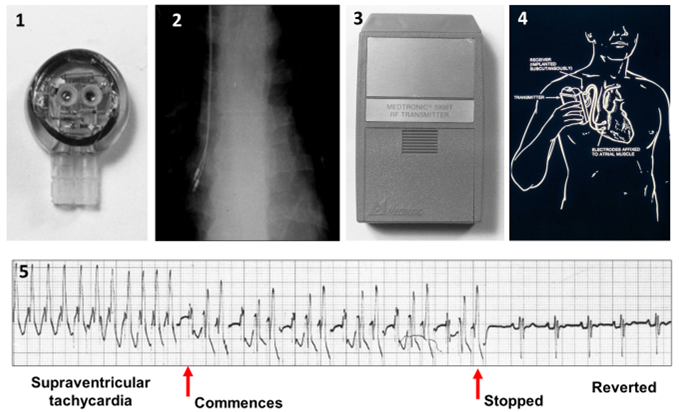 The procedure required a bipolar atrial lead which was not readily available and therefore two non-steroid eluting, active fixation leads with 5 mm high profile unipolar connectors were inserted in the right atrium. There were universally high thresholds and as this was manually actuated, sensing was not an issue.  The chest radiograph shows two stretched leads because of rapid growth in a teenager (2).  During an episode of supraventricular tachycardia, the radiofrequency transmitter (3) was placed over the receiver (4) and actuated. Radiofrequency energy was then delivered into the atrium for a period and then stopped (5). If symptomatically better, it was not repeated.

An advance on this, was an implantable pacemaker with a power source, but still manually actuated. This was used in either the atrium or ventricle with ventricular leads more reliable.

Implanted bipolar anti-tachycardia pacemaker for reverting ventricular tachycardia. The magnet closed a reed switch and delivered ventricular stimuli at regular intervals, reverting the tachyarrhythmia. Upon removal of the magnet, the stimuli ceased.

A marked advance was the PASAR (Programmable Automatic Scanning Arrhythmia Reversion) pacing system with its complicated programmability and stimulator for use in the electrophysiology laboratory. For the first time, automatic detection, activation, and reversion was possible. 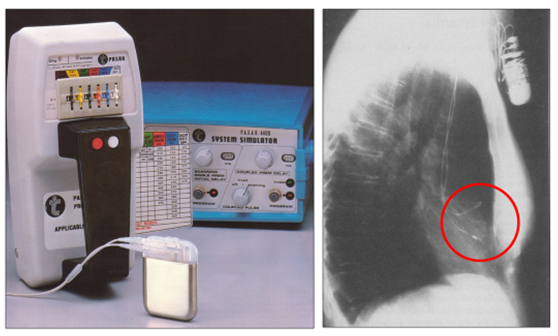 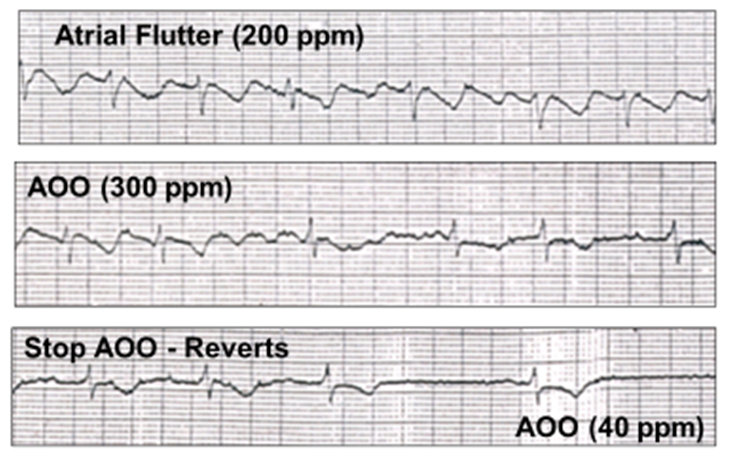 Atrial flutter 200 bpm. AOO pacing is delivered at 300 bpm. Upon cessation of anti-tachycardia pacing, there is backup AOO pacing at 40 bpm.

Automatic ventricular anti-tachycardia pacing is available in all implantable cardioverter defibrillators (ICD) and may result in unusual appearances on the Holter monitor recording. 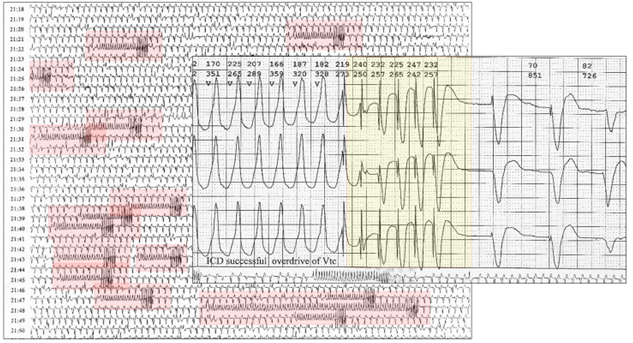 Not all anti-tachycardia therapy is successful

After a programmable number of unsuccessful attempts at anti-tachycardia pacing, defibrillation (red highlight) is successful.

The Upside Down ECG