This was a challenge as it covers a topic, we know little about and some may disagree with my comments. Don’t hesitate to make a noise about it!

Have a look at this ECG:

In V2, V3, there is a bifid T wave with both a nipple (red highlight and arrow) and notch (> 40 ms). This is due to unevenness in ventricular repolarization and is probably innocent. It is classically seen in elite athletes. There is a longer QT/QTc and larger left ventricular volumes on echocardiography than a normal cohort.

In my experience, it is also seen in apparently normal children as shown:

Here is another example which will frighten some of us!

Lead V2 (yellow highlight) has ST elevation probably due to early repolarization and a notch (red arrow). How would you report this ECG?

Then, there is the camel hump T wave with long QT syndrome (red highlight)

I have also seen this in athletes with a normal QTc.

What happens when the nipple or small positive deflection occurs earlier at the junction of the QRS and T wave?

This is referred to as an epsilon wave (red highlight and arrow) in contrast to a delta wave that occurs at the beginning of the QRS. It is said to result from late excitation of right ventricular myocytes. The abnormality is seen from V1 to V5.

In this example the ECG is otherwise normal and the significance unknown.

Epsilon waves also occur in 30% of ECGs in patients with arrhythmogenic right ventricular dysplasia (ARVD). Here the right ventricular myocytes lie within a sea of adipose tissue, which accounts for the delayed depolarization and ventricular tachycardia with a left bundle branch block. There are also inverted T waves in V1 to V3 (85% of cases) and wide upstroke to the S wave (95% of cases).

Epsilon-like waves may occur in right bundle branch block as part of the conduction disturbance.

Notches and nipples can occur when P waves are embedded in the T waves.

Here is an example of junctional escape rhythm with retrograde conduction (red highlight).

The retrograde P waves are inverted (red highlight) and the junctional cycle slower than the sinus cycle.

A junctional rhythm without retrograde conduction may also have P waves embedded within the previous T waves. These are sinus beats:

The rhythm is iso-rhythmic AV dissociation and is simply competition between sinus bradycardia and junctional escape rhythm (red highlight) overnight. The arrhythmia is innocent and frequent in the young. The very early sinus P waves (red vertical arrows) lie within the QRS and consequently prevent retrograde conduction.

A junctional tachycardia with retrograde conduction will also have P waves within the QRS.

Non-conducted atrial ectopics, If premature enough, can also reside within the previous T wave and are refractory to AV conduction:

The notches are premature bigeminal atrial ectopics (red vertical arrows).           Some of the conducted ectopics in a later tracing were in a trigeminal sequence.

Sinus complexes can also lie within the previous T wave. Here are some examples: 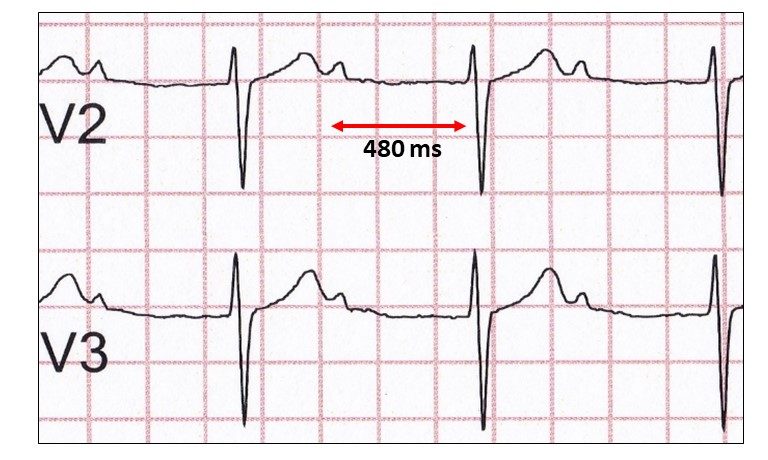 In this example, the P waves are regular, but the QRS complexes are not!

What does that mean?

Here is an example with complete heart block and a narrow QRS complex.