The Artefact and Atrial Fibrillation: An Unholy Alliance

This ECG landed on my desk for a second opinion:

Look at it closely. At least you got the left anterior fascicular block correct!

The question is “what is the relationship between atrial and ventricular pacing”? 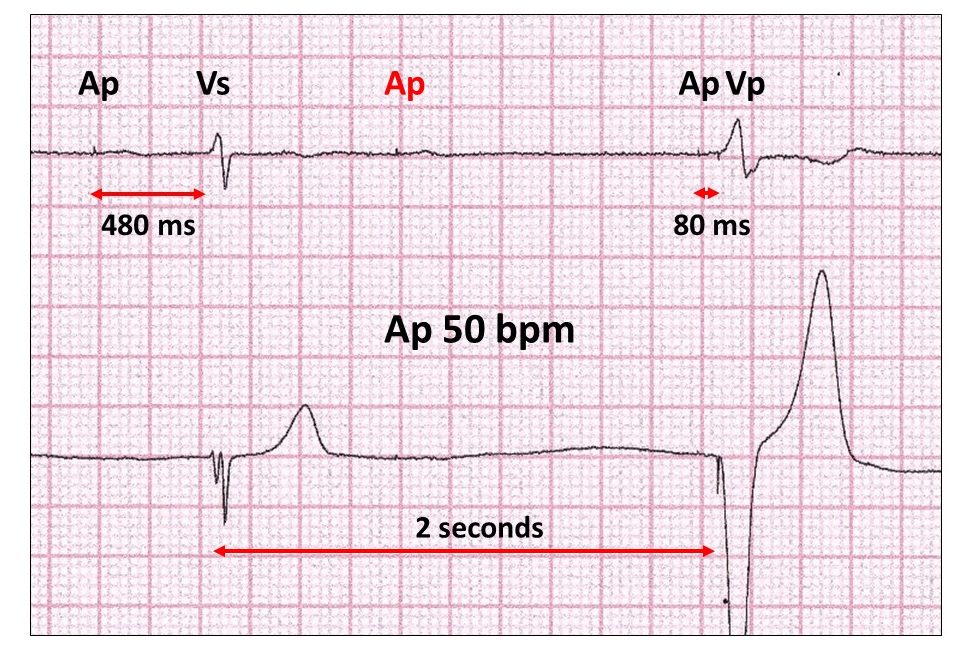 Unless there are two competing pacemakers, the A and V must be related.

There is dual chamber pacing with an 80 ms AV delay.

All pacemaker manufacturers have designed their own unique algorithms, which can be recognised on the surface ECG. There are seven algorithms from 5 manufacturers listed in fun with ECGs 16, a few weeks back.

On the ECGs, we generally see two ECG appearances for each algorithm.

The Medtronic MVPTM is a complex algorithm, which has its own programmable mode AAI(R) – DDD(R), which is an amalgam of AAI pacing and DDD backup.

When programmed ON, the pacemaker paces AAI(R), provided there is AV conduction. A single dropped beat and the pacemaker converts to DDD(R) for one beat with an AV delay of 80 ms (red highlight).

In this case, there is nocturnal Wenckebach AV block.

Dual chamber pacing occurs for ONE cycle only and the pacing returns to Ap Vs.

In order to convert from AAI(R) to DDD(R) – Vp, the rule of 2 out of 4 consecutive cycles with failure of AV conduction must be adhered to.

Beats 1 and 4 are dropped beats and each are followed by Ap Vp 80 ms AV delay.

The pacemaker now says, “enough is enough” and converts to Ap Vp with the programmed AV delay of 200 ms, confirming the switch to DDD(R), albeit a ventricular ectopic between.

Note there is a violation of the AV delay with Ap Vs longer than Ap Vp (see fun with ECGs 16).

Such algorithms may result in symptomatic pauses, particularly when used in patients with intermittent AV block.

More recently, Medtronic have added another programmable iteration to this algorithm, where if the AV delay becomes too long (you choose the values), the pacemaker with revert to DDD(R).

As these algorithms are generally used in patients with sick sinus syndrome, most illustrations are seen with Ap and by design the timings of this algorithm are with Ap.

If there is Ap, then the algorithm is technically the same, but the AV delay of 80 ms disappears, because the timing is linked to the next Ap.

The ECGs are hard to describe, and I decided not to include examples.

You may feel that this is a rare finding and the discussion esoteric.

Sadly, the findings are not uncommon with Holter recordings of paced patients.

I will discuss other companies’ appearances in later blogs.

It’s all in the timing

The Artefact and Atrial Fibrillation: An Unholy Alliance