The ECG below was reported as sinus rhythm with intermittent bundle branch block.

The next illustration shows examples of idioventricular rhythm. 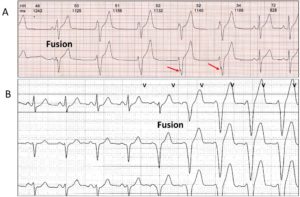 A, the first complex is also a fusion beat, albeit 95% sinus origin and the PR interval marginally shorter than the sinus beats at the end of the tracing. You can also see concealed P waves buried in the broad QRS (red arrows). The competition between the two pacemaker foci is dependent on sinus arrhythmia.

B, the idioventricular rate is faster and this leads to a confusion in terminology. Some people may call this an accelerated idioventricular rhythm or even slow ventricular tachycardia. However, I prefer idioventricular up to 99 bpm. Again, there are several fusion beats with different contributions from each pacemaker as the sinus rate slows.

Returning to our original ECG:

The diagnosis of sinus rhythm with bundle branch block is clearly incorrect. There is a variable PR interval and fusion beats confirming two pacemaker foci.

I call this an idioventricular rhythm with isorhythmic AV dissociation.