Where Am I Pacing From?

How does electricity flow through the body?

Current generated in the pacemaker flows along the lead conductor and enters the cathode as electrons or ohmic energy (red highlight). In order to conduct through tissues, it must be converted to ionic energy and as the most frequent salt in the body is sodium chloride, the electrons are converted to negative chloride ions (Cl–) in a complex electromechanical event at the electrode-tissue interface. These chloride ions then flow through the myocardium toward the anode or positive pole. 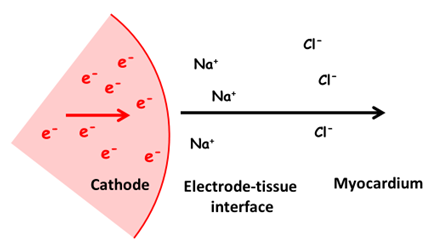 Because the cathode is negative, sodium ions (Na+) remain oriented to the cathode surface as stored charge and forms a temporary barrier or resistance to conduction, referred to as polarization, which increases as the energy is delivered. It then dissipates as an afterpotential. Meanwhile, the electrically negative chloride ions generate an electric field, which, if it exceeds the local myocyte cell membrane threshold, results in an action potential and with propagation, global depolarization of that chamber and cardiac contraction.

On the ECG, the global delivery of the energy is seen as a stimulus artefact. 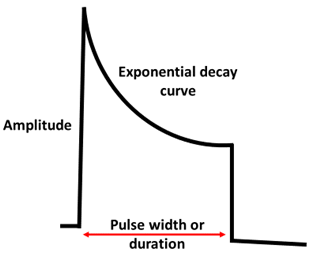 The stimulus artefact represents the voltage amplitude over a period of time called the pulse width or duration. During energy delivery, there is a fall in voltage referred to as an exponential decay curve.

By definition, all electrical circuits are bipolar requiring a cathode and an anode. When applied to a conventional pacing lead, the terms unipolar and bipolar indicate the number of electrodes on the lead. 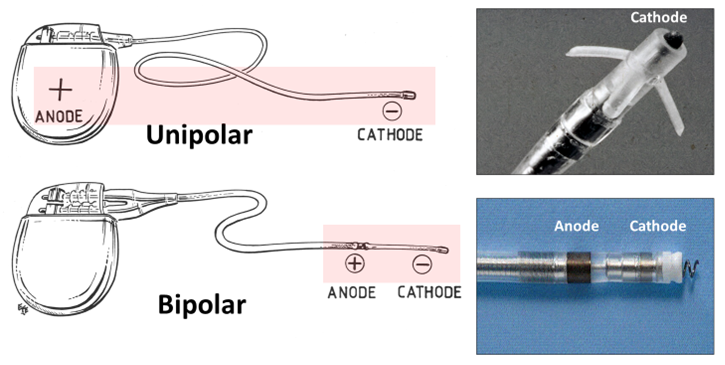 On the ECG, the stimulus artefact is large for unipolar pacing and small or absent for bipolar pacing. 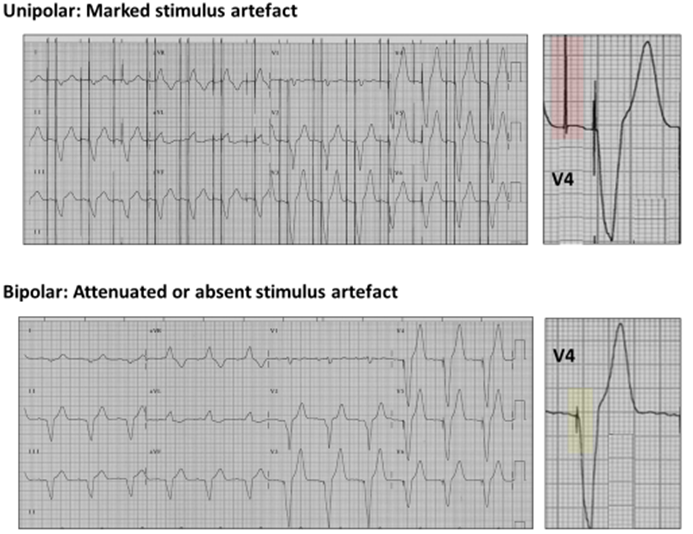 These ECGs from the same patient, show dual chamber pacing; programmed unipolar above and bipolar below. V4 has been enlarged to demonstrate the stimulus artefacts. Large artefacts with unipolar pacing (red highlight) and small or absent with bipolar pacing (yellow highlight).

I am frequently asked if an ECG shows cardiac pacing. What are the clues:

ECG tracings are frequently filtered to minimize artefact. These filters are usually applied at the time of the test but can be performed later on with reporting software.

An extreme example of turning OFF filters to identify the stimulus artefact (red highlight) is shown. 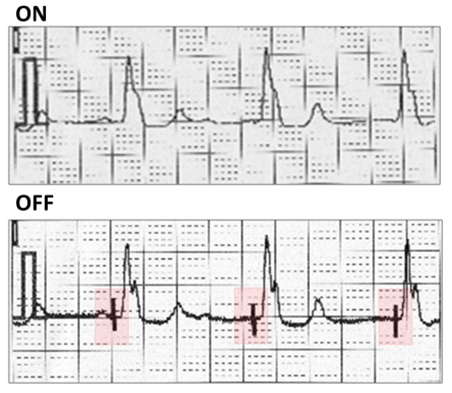 In most cases the changes are subtle (atrium red, ventricle yellow highlight), but  good enough to identify pacing. 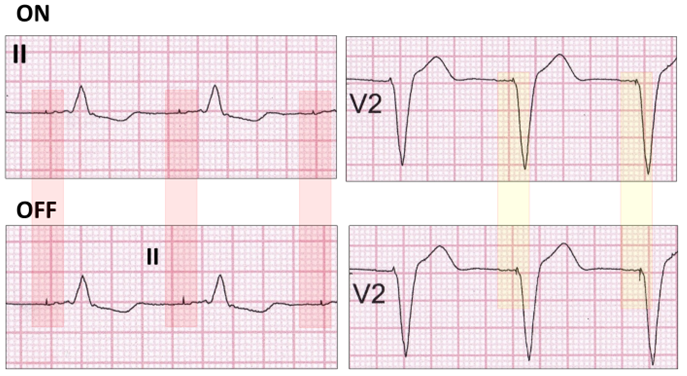 When there is no obvious stimulus artefact, the timing and the paced QRS width becomes critical in determining pacing.

The afterpotential of the unipolar stimulus artefact may distort the subsequent QRS. 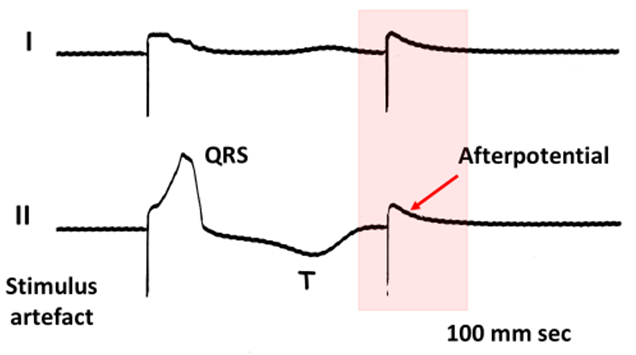 In this example with unipolar pacing, there is a high threshold exit block and the second stimulus artefact (red highlight) does not depolarize the ventricle. The decay curve (red arrow) represents the afterpotential. Note in lead I, the complexes are near identical and exit block would have probably been missed.

The unipolar ventricular stimulus artefact may distort the appearance of the subsequent QRS, thus preventing determination of the QRS axis.

In this example, a temporary pacing lead (cathode) lies at the apex of the right ventricle (red cross). The anode used was a needle placed under the skin in various positions to indicate traditional pulse generator positions.

The QRS appearance should be the same irrespective of the anode position. However, the QRS is grossly distorted by the afterpotential resulting in a different axis for each position. Knowledge of the QRS axis is important in understanding where the pacing lead lies in the right ventricle which will be covered later.

Increasing the voltage output will also increase the stimulus artefact size and with unipolar pacing will further distort the subsequent QRS. 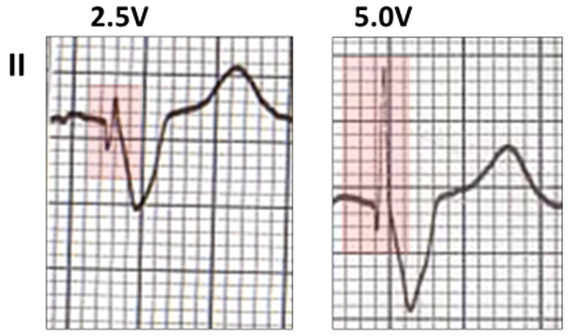 The vertical red arrows reflect the size of the stimulus artefacts with respiration.

Of course, the intracardiac stimulus artefacts do not change with respiration. Rather the transthoracic impedance changes with inspiration and expiration, altering the ECG lead dipole and hence the recorded stimulus artefact size.

Now you know all about the pacing stimulus artefact.

Where Am I Pacing From?