The term ectopic means “out of place” or “abnormal position” and in relation to the heart generally refers to an early heartbeat, whose origin is from a focus other than the sinus node.

The term ectopy is synonymous with ectopic, but it also helps identify combinations of ectopics, such as atrial bigeminy or couplets.

Why do I prefer the term “ atrial ectopic”?

The term supraventricular ectopic is widely used as it encompasses all ectopic activity above the ventricles. However, the term can be easily confused with ventricular ectopics, both in conversation and reports. The term atrial ectopic is therefore linguistically easier to differentiate from ventricular, but the purist will argue that the junctional ectopic is not truly atrial. The terms, atrial extrasystole or premature atrial contraction (PAC), although frequently used in the literature imply a mechanical event, rather than the electrical event seen on the ECG. For this reason, some ECG reporters now refer to a PAC as a premature atrial complex. Both this and atrial premature depolarization (APD) are cumbersome terms.

Where do I come from?

Ectopics that originate low in the atrium are commonly referred to as low atrial (inverted P wave) or junctional (P wave absent or follows the QRS). Those ectopics high in the atrium, adjacent to the sinus node have a P wave similar or identical to the sinus P wave and are believed to arise from the crista terminalis. Another occasionally used term is nodal ectopic, which limits its origin to the atrioventricular node and could be confused with the sinus node.

Escape beats should be distinguished from atrial ectopics. When the sinus cycle pauses or slows sufficiently, subsidiary escape pacemaker foci assume control of the cardiac rhythm. The fastest of these are usually atrial escape foci, distinguished by arriving later than the basic sinus cycle and manifesting a different P wave morphology to sinus beats.

This presentation, and the next “fun with ECGs” will focus on the exotic runs of atrial ectopics or rather ectopy.

Here is a run of atrial ectopics (red highlight) occurring after each sinus beat and referred to as atrial bigeminy.

The ectopic P waves are similar to the sinus P waves and thus the focus is high in the atrium near the sinus node.

When the P waves of the atrial ectopic are inverted in leads II and III, they are called low atrial bigeminy. 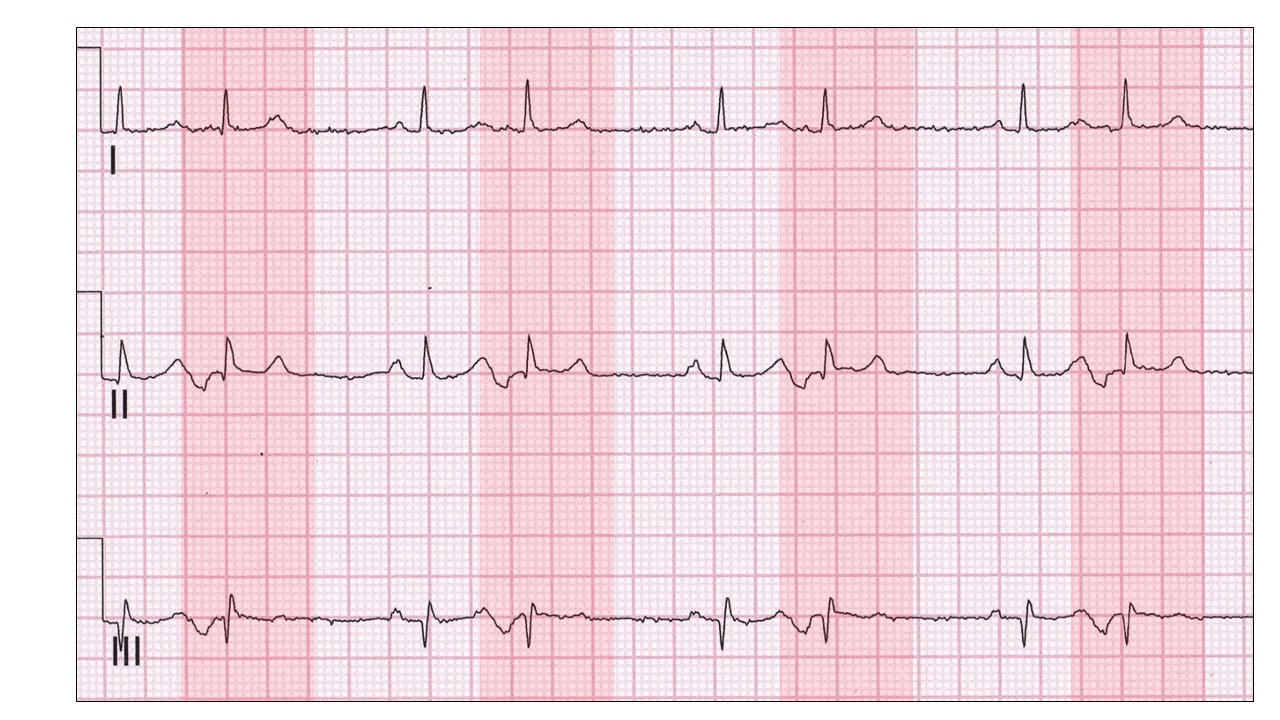 Because atrial ectopics are premature, they may not always conduct to the ventricle with a normal PR interval.

In this example the ectopics are premature enough as to result in a Wenckebach atrioventricular block with increasing PR intervals (red highlight) and a dropped beat (yellow highlight).

The block may also occur lower in the conducting system, and in this case the left bundle branch but once again demonstrating a Wenckebach sequence of increasing block (red highlight).

Such appearances can get complicated.

This example was called supraventricular tachycardia with intermittent aberration. 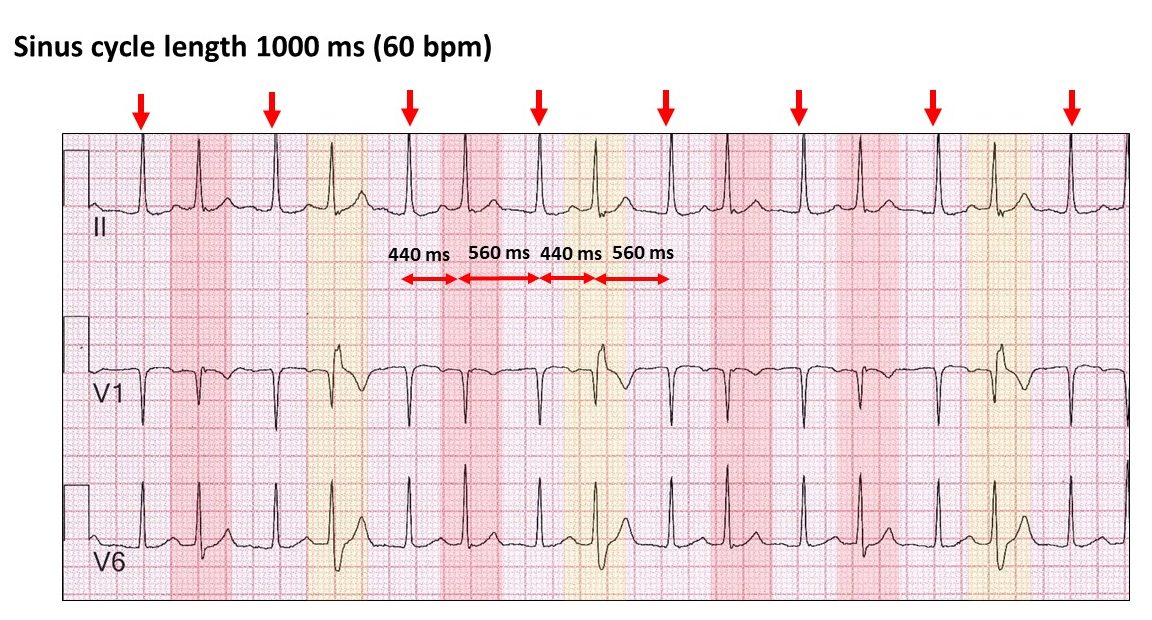 The P waves are poorly seen, and the alternating beats are premature with increasing right bundle branch block aberration in a 2:1 Wenckebach sequence (red and yellow highlight). We have no idea of the true sinus rate and this may be interpolation.

On occasion atrial ectopics may fail to conduct because of underlying atrioventricular conduction disease. This is non-conducted atrial bigeminy.

The example above was called 2:1 atrioventricular block. Note that the ectopics, although premature are late and arise from high in the right atrium and mimic but are not identical to the sinus P waves.

Non-conducted atrial bigeminy may also occur when the atrial ectopics are very premature and embedded in the previous T wave. The differential diagnosis is sinus bradycardia as shown below:

Note, the run commences with a very early conducted atrial ectopic (yellow highlight) and the embedded P waves result in bifid notched T waves. There are a number of causes of this appearance in chest leads, but that is another story for another “fun with ECGs”.

Atrial trigeminy are sequences of two sinus cycles followed by an ectopic and the sequence commences again.

The ectopic P waves may resemble the sinus P waves:

Or very premature with the P wave embedded in the previous T wave:

We cannot finish without discussing interpolation, so here is an example.

Atrial trigeminy with both aberration and interpolation.

And you thought atrial ectopy was sooo boooring!

It’s all in the timing