Is this ventricular tachycardia?

How would you interpret this ECG

Since the dawn of clinical electrophysiology, attempts have been made to pace the ventricles via the AV conducting system. It wasn’t until it was recognized that right ventricular apical pacing could result in left ventricular dysfunction, that interest was once again rekindled, although early attempts at His bundle pacing were limited by the available technology. Today, His bundle pacing, is used to recruit the intrinsic AV conducting system, thereby establishing “ventricular pacing” with a narrow QRS. 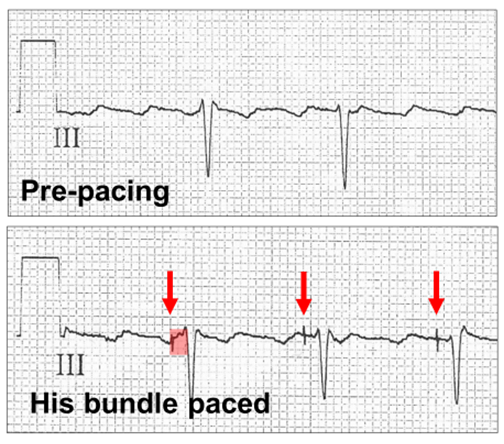 It is not surprising that the resting 12-lead ECG footprints of a patient with His bundle pacing can be easily missed or misinterpreted. The appearances are dependent on where capture occurs, whether it be “selective” or within the bundle or “non-selective” which also involves adjacent myocardium. Other factors that determine the pacing appearance include the pathophysiology of the conducting system, the pacing thresholds, and the programmed energy.

With non-selective His bundle pacing, the adjacent myocardium is also depolarized resulting in characteristic ECG changes. 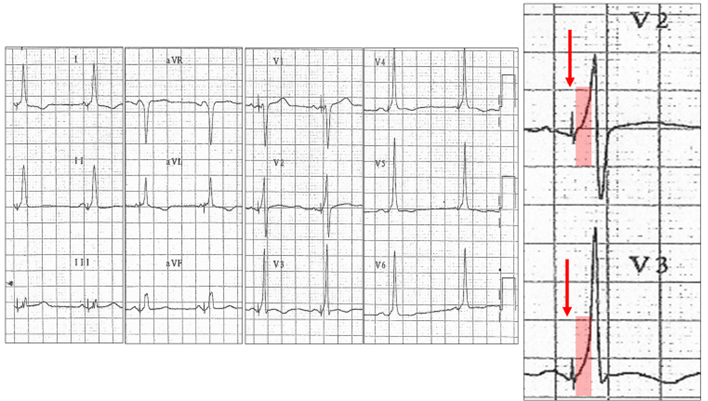 T wave changes resultant from adjacent myocardial depolarization, compared to the pre-paced ECG are also a feature of non-selective His bundle pacing. 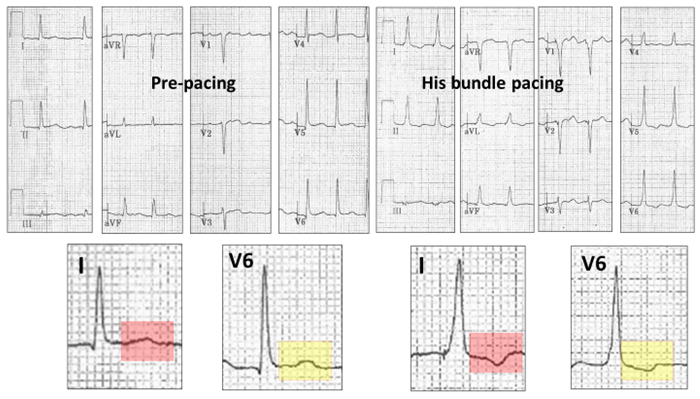 Non-selective His bundle pacing in a patient with atrial fibrillation.

Left: Pre-pacing with upright T waves in leads I and V6.

Right: His bundle pacing with subtle pseudo-delta waves and T wave inversion in leads I and V6.

His bundle pacing may also completely or partially correct a right or left bundle branch block, as longitudinal dissociation, or the level of differentiation into the bundle branches, may occur high in the His bundle with the pacing distal to this.

Following His bundle pacing, the bundle branch block has resolved.

Although His bundle pacing is theoretically the ultimate site for physiologic ventricular pacing, it has inherent limitations such as high pacing thresholds, poor sensing, procedural issues, and the possibility of direct atrial capture.

An alternate method is left bundle branch pacing also known as deep septal pacing using a bipolar screw-in lead anchored deep within the ventricular septum, so that it encroaches on the fan-like left bundle branch. It is particularly useful to correct left bundle branch block in patients otherwise requiring pacing for bradyarrhythmias. Unlike the His bundle, there is no fibrous capsule surrounding the bundle branches and hence the initial QRS is mostly fusion between left bundle and surrounding myocardium and therefore there is usually no latency.

Depending on the exact location within the conducting system, different appearances may result from varying voltages. Also, of importance is the depth of the lead tip in the septum. The anode may lie to the right of the septum and thus, the right bundle or just the adjacent right septal myocardium can be paced at the same time as the left bundle.

With high voltage, we would expect anodal contribution and thus non-selective capture. In lead I, there is a suggestion of a pseudo-delta wave (red highlight).    There is also a suggestion of trivial latency (yellow highlight). However, this is limited to only a few leads and one must take care not to over-diagnose this, particularly with the lead embedded low in the septum. The loss of the partial right bundle branch block is possibly due to anodal pacing.

The interpretation of ECGs with conduction system pacing is very new and we are learning something every day. In the future, we may interpret these ECGs differently.

I had a lot of help with this one. Thanks Irene Stevenson.

Is this ventricular tachycardia?

How would you interpret this ECG