Biventricular pacing or simultaneous depolarization of the right and left ventricles is a non-bradyarrhythmic indication for permanent cardiac pacing. It has been found useful for symptomatic patients with a non-ischaemic congestive cardiomyopathy on optimal tolerated medical therapy, New York Heart Association class 3 or 4 and a left bundle branch block on the ECG. The left bundle branch block allows septal depolarization and contraction, whilst the remainder of the left ventricle has late activation. This results in ventricular dyssynchrony, which remains uncorrected with standard medical therapy, but corrected with biventricular pacing and is referred to as cardiac resynchronization therapy (CRT).

The transvenous implantation involves an additional ventricular lead placed into a cardiac vein via the coronary sinus after a venogram to identify the vein (red arrow).

Although biventricular pacing is referred to as simultaneous, the left ventricle is usually paced immediately before the right to ensure optimal synchronization. This results in a right ventricular bundle branch block configuration (yellow highlight) on the ECG. 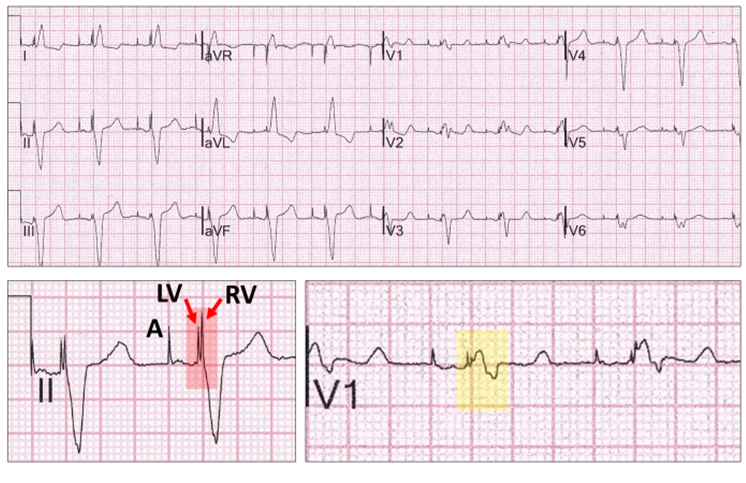 If the latency period between left (LV) and right (RV) stimulation is about 40 ms or more, then two stimulus artefacts can be identified on the ECG (red highlight). With dual chamber pacing, these can be identified after atrial pacing (A) or sensing and an appropriate AV delay.

The appearance of the right bundle branch block configuration will vary considerably depending on the LV-RV latency. 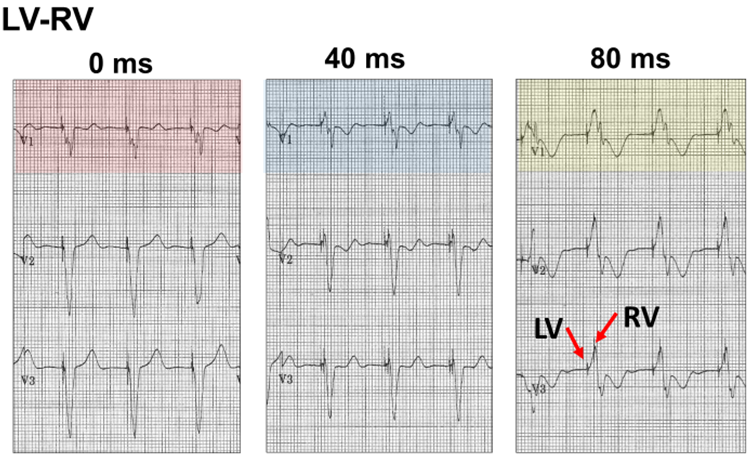 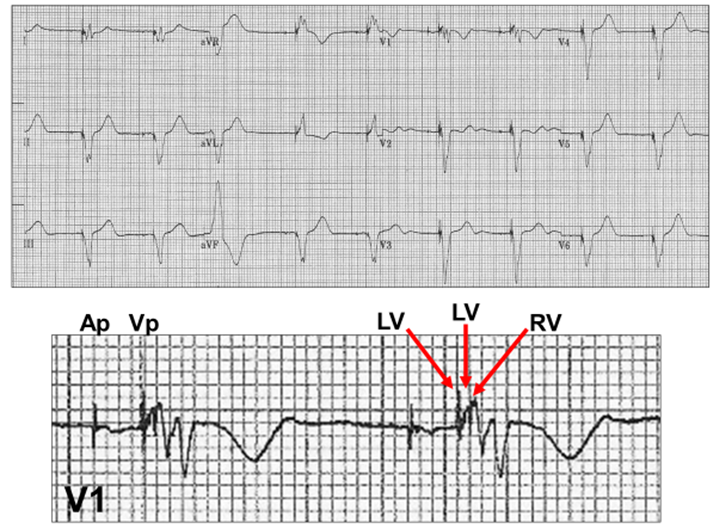 There is a very confusing ECG appearance seen with biventricular pacing and sensed ventricular events. The challenge of biventricular pacing is to pace the ventricle greater than 90% of the time thus optimizing resynchronization. However, with atrial fibrillation or frequent ventricular ectopy, this may become a challenge. A novel, but unproven pacemaker algorithm is to attempt to pace both ventricles on sensing of the native ventricular rhythm. This is essentially ventricular triggered pacing (VVT or maybe DDT). It is present as a programmable function in at least two manufacturer’s products (Ventricular Sense Response – Medtronic Inc, Minneapolis, MN and BiV Trigger – Boston Scientific, St Paul, MN). My concern is that the default setting is ON and if not required, must be programmed OFF. Ventricular sensing of the native rhythm is variable and may be late and therefore biventricular pacing is unlikely to contribute significantly to ventricular depolarization and hence resynchronization.

The rhythm strips show biventricular pacing with a very short LV-RV latency and a right bundle branch block configuration (red highlight). There is frequent multifocal  ventricular ectopy with the triggered stimulus artefacts lying midway through the QRS (yellow highlight). The appearances are confusing and suggest ventricular undersensing although the timings are not correct. However, not all ectopics have embedded stimulus artefacts (blue highlight), but the timing of the next paced beat suggests that the ectopic is actually sensed. As with VVT pacing, there is a programmable upper rate limit for biventricular triggering with the default being about 130 bpm. The non-triggered ventricular ectopic is earlier than the triggered ones and thus violates the upper rate sensing limit.

This is also demonstrated in the next ECG: 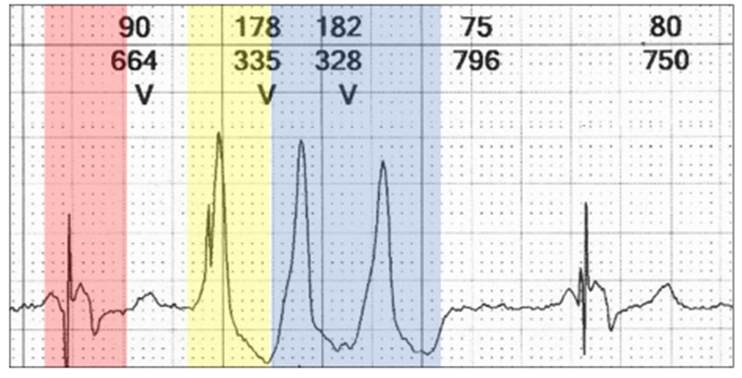 Triggered single chamber biventricular pacing with a biphasic stimulus artefact (red highlight). This is a characteristic appearance of two stimulus artefacts, each with an opposite vector. A ventricular triplet is sensed as suggested by the timing of the next paced beat, The first ventricular ectopic demonstrates triggering with embedded stimulus artefacts (yellow highlight), whereas the next two are also sensed (blue highlight), but do not trigger an output as the upper rate sensing limit has been violated. Once again, the ECG is confusing.

With ECG reporting of pacing rhythms, we now need to determine the bundle branch block configuration, count the number of ventricular stimulus artefacts and identify ventricular triggering with sensing.

Enough to give me a headache!